Dusty Miller and Son, Harry Potter: A History of Magic

Obviously, I have not drawn any Real TV Wisdom for ages. But last night I was watching the BBC program to promote the British Library Harry Potter exhibition, because how can you not want to support that British cultural circle jerk? And these two gentleman just came out with the most wise and true statement about trees. And how could I not draw them? Miller senior has A TOP KNOT. IT LOOKS LIKE HE'S GOT A CLOUD THAT LIVES ON HIS HEAD. Also their actual job in the real world is they make magic wands when the forest spirits tell them to.
Seriously you should watch it. It's on iplayer. 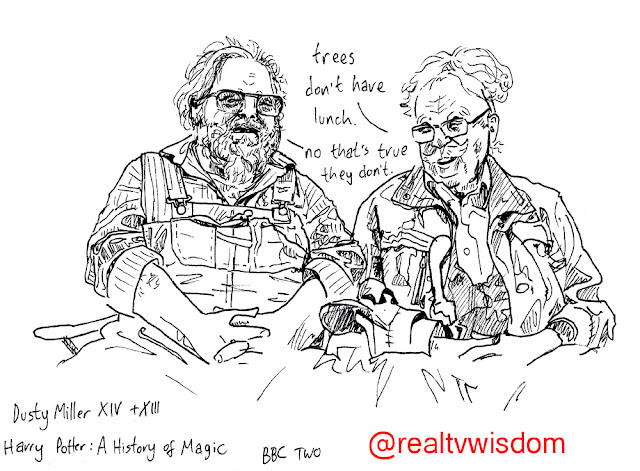 Posted by Jenny Robins at 8:57 AM No comments:

I watched this one episode of Geordie Shore from ages ago. It's one of the ones that's free if you have Amazon Prime. The new ones are not free. But I think the format is broadly the same as it was in 2012. I was moved to stop and draw during the episode, not once, twice, but in fact four times. So consider this a special. Firstly two drawings of Charlotte Crosby, who is actual linguistic genius. If she has not already been contracted to write children's books she should be. I would buy them. And I don't even have children. She does have her own TV show now though, so I'm glad someone recognised her potential. Here is a video of her having a spiritual and emotional experience meeting an Elephant. I might actually have to draw that as well later. I love her. 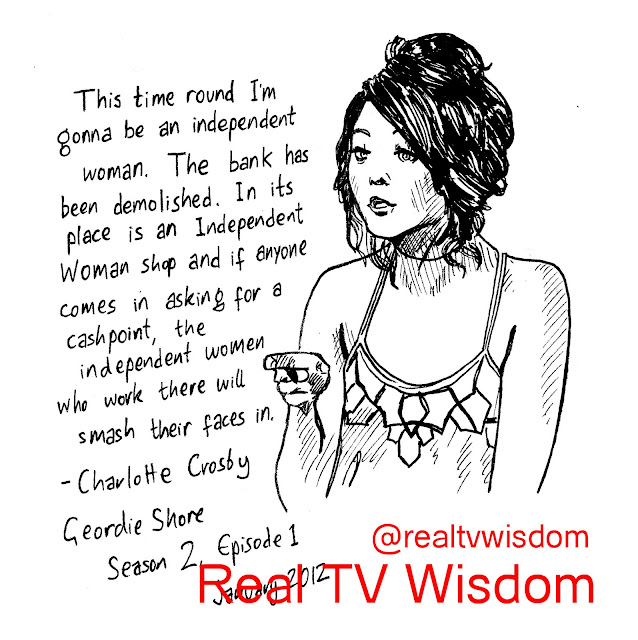 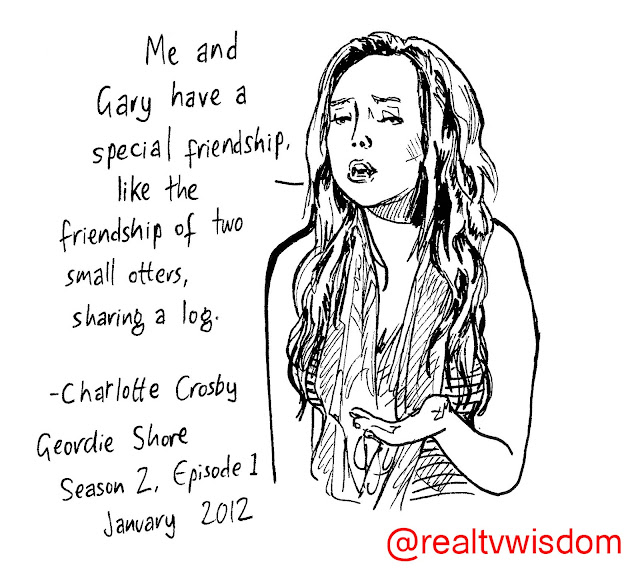 She does seem to have an uncanny skill at doing the opposite of what she says she's going to though. Don't know what happened to the metaphorical independent shop women, but then I haven't watched much of the other 10 seasons. Maybe they have expanded and now run a franchise empire. Banking is mostly done online now anyway. I don't know who Crosby has trusted her winnings from 2013 Celebrity Big Brother to, or do they have to give it to charity? 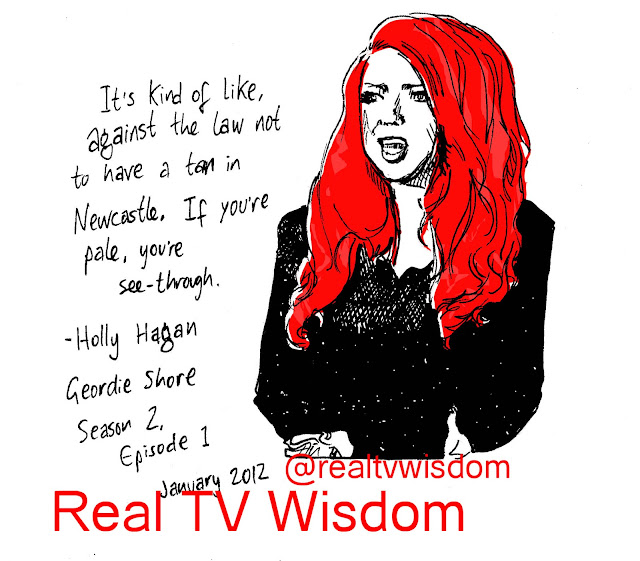 I'm more worried about my own safety if I ever visit Newcastle again. Last time the tan police must not have spotted me, but that may have been helped by the fact I was see through. Holly Hagan may also have distracted them with her actual real life Ariel from the Little Mermaid hair. Unless she is actually Ariel from the little mermaid, having earned her legs by seducing scousers. In which case I think we can safely say she has got a voice this time. 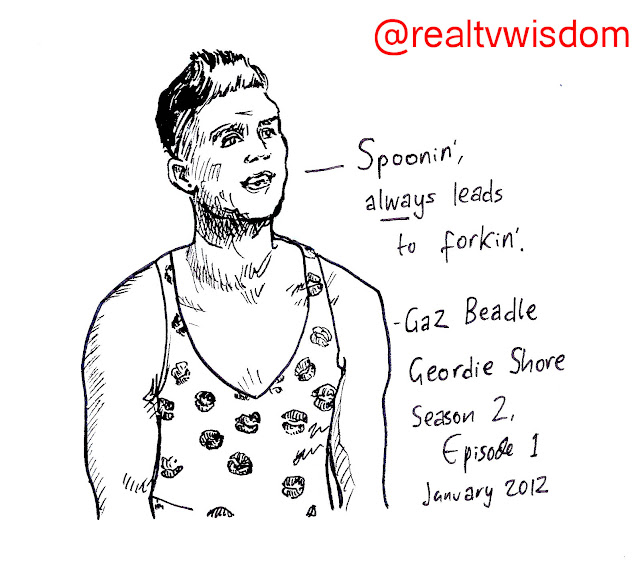 Although the women are the most interesting people on Geordie Shore, the men do sometimes have some canny wisdom to share too. Gaz's cunning ruse of inviting a girl back to the love shed, but only for spooning and cuddles, did indeed pay off and he was able to complete his cutlery collection.

Drama ensued. For another 10 seasons.

Posted by Jenny Robins at 9:35 AM No comments:

So I'm on holiday and I have a Netflix account active. I usually only do this for one month at a time. Because I have a dangerous tendency towards television addiction. I'm a narrative junky. Which does not actually help with the Real TV Wisdom project, because I specifically set myself the rules that the quotes I draw have to be unscripted. And the shows I am most susceptible to binging on are very much scripted. So until I begin the sister project, drawings of my favourite lines from Buffy and Gilmore Girls (Ellie Cryer may have already begun this project), Netflix is not the friend of my practice. Unless you count watching the whole of Unbreakable Kimmy Schmidt while I paint watercolour portraits. Which I actually do. 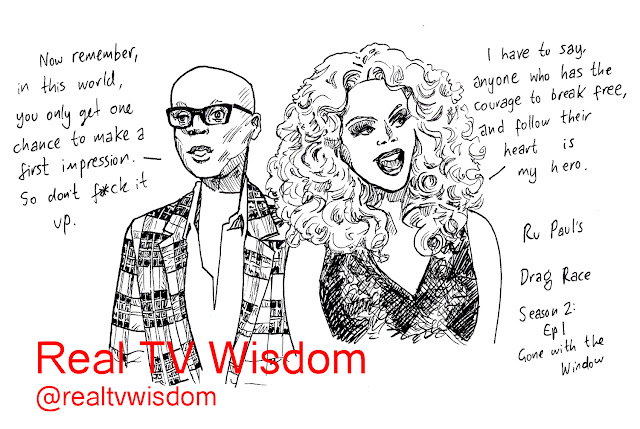 Anyway that whole preamble was my excuse for drawing from an old-as Ru Paul episode. It's the first one on Netflix. And what are time and space in these new days of on demand entertainment. Have you seen how long songs stay in the charts now? I love the inherent contradictory focus on supportiveness and bitchiness in this program, and I guess in drag culture, embodied here by the host's literal two faces. Its all like always be yourself and follow your dream you beautiful rainbow, unless you do something I don't like in which case you can f off and die. I also really enjoyed the crafting element of this episode (Gone with the Window) where the competing queens had to make outfits out of curtains (a reference to Scarlet O'Hara doing the same in the eponymous film, respect the pun), which shows a higher level of skill and creativity than ANTM, IMHO.
Posted by Jenny Robins at 7:46 AM No comments: 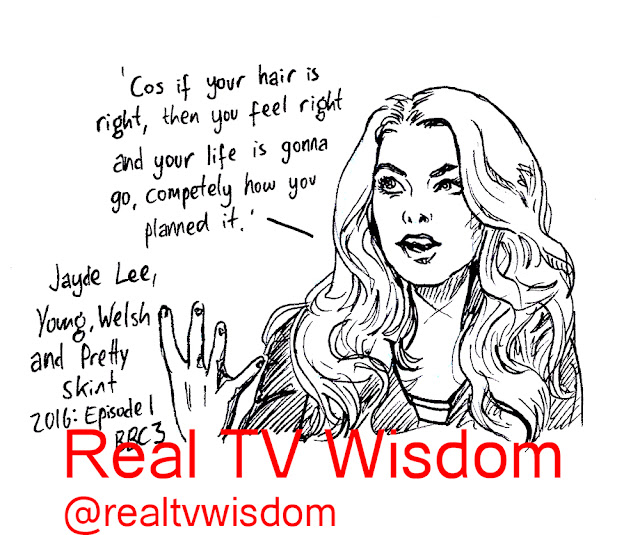 When I see TV programs about cultural bubbles within the country I live in (The Kingdom of United, or Britain the Great, and every-time there's a box on a form you're not sure which of those you should write, or is that just my struggle?) where people have really specific standards of beauty, it makes me question my beliefs in period fashion acquired from a book on fashion through time that I used to photocopy the black and white illustrations from when I was a child to use as colouring pages. Yes that's right, we made our own fun. Maybe if people in Essex and Wales are painting themselves orange, not every woman in the mid to late nineteenth century wore a bustle, and maybe not every woman in the sixties had a Mary Quant dress.

Which is to say, obviously that's not a thing. Not all young people in Wales are in the one single sub culture, and there are people in many places that value a good hair extension and well toned bicep, without crucially also talking funny.

Jayde Lee here, second runner up for Swansea in the 2012 Miss Universe Wales pageant and wise hairtrepreneur, offers luscious long hair for sale or rent to enable local beauty enthusiasts to fulfil their life plans. But she doesn't trust men with beards.

You can catch Young, Welsh and Pretty Skint on Iplayer unless you're reading this from far enough in the future that you can't any more.

Posted by Jenny Robins at 9:11 AM No comments:

Teenage Millionaire: The Year I won the Lottery 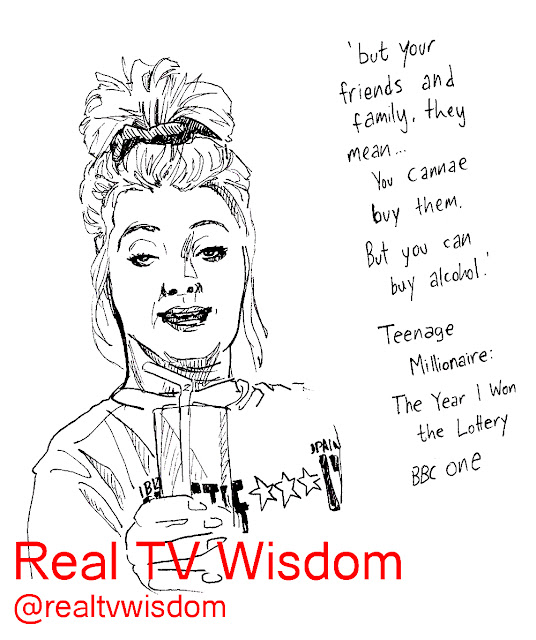 This Teenage Millionaire doc was on BBC One back in December, but they showed it again on BBC Three this week. Jane Park is the subject and is, let's be honest, a bit of a legend.

Having won a million on the lottery at age 17, she basically does not change her life plan or life style much, other than to have no limit on the amount of partying she can do if she wants to. She doesn't like the taste of champagne, and would rather stay in a basic hotel where the food isn't weird and posh. Partying is only fun if you've got a true pal to do it with though, and the old cliché about money not buying them obvs rings true for Jane. She truly is rich if she's got 3 true friends, her nan to point out that money can't buy self respect, and also all the cocktails in Magaluf as an option.

Oh, and a Louis Vuitton handbag with a dog shit in it.

I think we'd all like to think that money wouldn't change us much. For me it would be cat vomit on a Burberry trench coat, but different strokes for different folks.
Posted by Jenny Robins at 4:13 AM No comments: 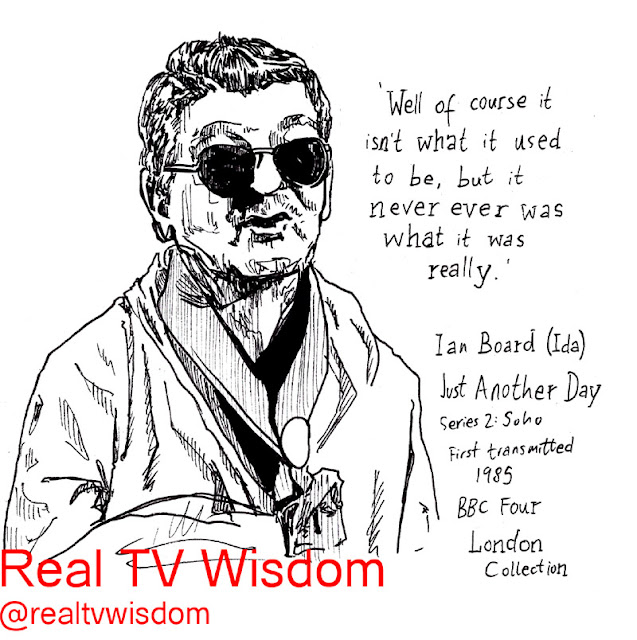 The history of Vox Pop of course goes back as far as the Latin suggests, this is not so far but it was filmed the year I was born. Which is to say 1985. On the BBC Four London Collection, this episode of Just Another Day focuses on the ever evolving face of Soho, doing that charming BBC thing of just trying to capture the everyday and the extraordinary side by side as they do exist. Ian Board was owner of the infamous Colony Room a Soho institution and members bar for artists and outsiders which sadly closed in 2008. Quite a lot of the episode is older Soho residents reminiscing about how they miss the lovely friendly whores they used to know round there when they were young and I loved how Board indulgently cuts through the crap with this line at the end.

How deliciously nostalgically cyclical and unlikely, to sit in 2015 watching an old lush from 1985 reminisce about fraternising with ''some of the richest and most famous and successful people...a lot of homosexuals as they were known in those days" some 40 years before that. And if you google Ian Board this video clip is the first thing that comes up - a fragment in the internet ether.

Think how much footage of Soho must have been taken on smart phones in the last few days (Pride 2015) and let your mind boggle at the enlarged world of data we live in. It definitely isn't what it used to be, but I don't know that the technology we have today will give us any more insight into what it actually is, when we come to look back in 40 years ourselves.
Posted by Jenny Robins at 3:53 AM No comments:

Email ThisBlogThis!Share to TwitterShare to FacebookShare to Pinterest
Labels: 1985, BBC 4, Ian Board, isn't what it used to be, Just Another Day, London, nostaliga, Soho, The Colony Room

So Sky2's The Secret Life of Suburbia is my new favourite thing. You can't go wrong with exploiting mildly eccentric friendly people. The episode I happened on this morning was focused on various mildly unusual British holiday experiences, such as a creepily naff self help house where you have to bounce on a mini trampoline and shout affirmations (for £300), some surprisingly well endowed middle aged nudists and a group of really lovely seeming Live Action Roleplay enthusiasts, or 'Summer Knights' as the show dubbed them. I particularly liked Erol Kentli's perspective on the whole thing: 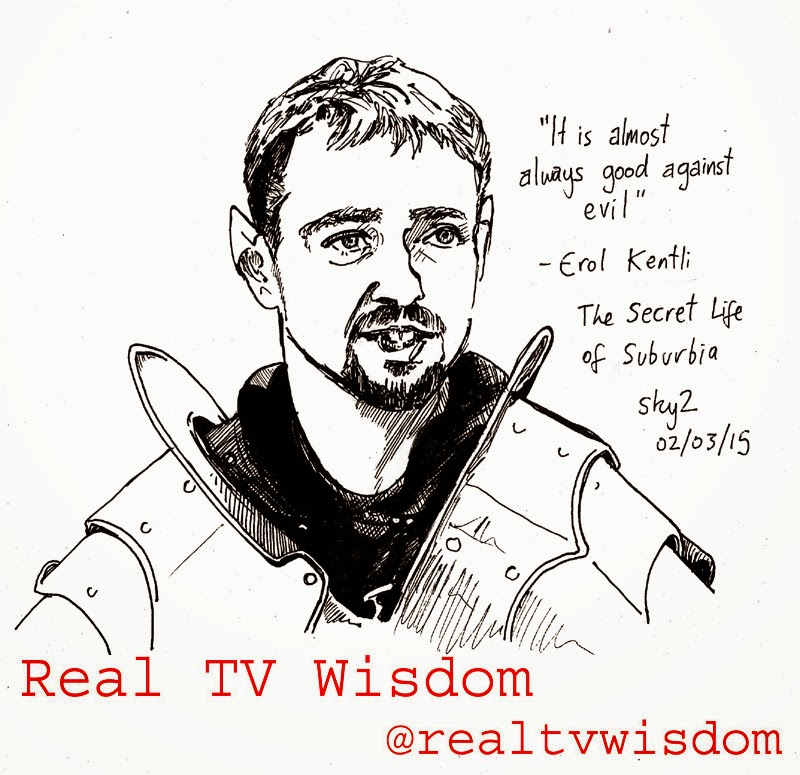 In full: "It's almost always good against evil, the forces of evil out to do something nasty, as they do, world domination that sort of thing."

Oh Erol how right you are, our fragile human brains are always seeking to cast our world into black and white (or entirely white as the cast of The Secret Life of Suburbia seems to be). It is the eternal battle we must fight. The struggle writ large in our communal mythic hind brain that makes classical narrative so satisfying. Whatever pretensions of complexity and subtlety we have, it almost always comes back to good guys and bad guys.

If only the forces of evil were easier to spot in real life, all of these heroes in waiting in plumbing, retail and games design could rise and vanquish them for us.

Posted by Jenny Robins at 4:29 AM No comments:

Jenny Robins
jenny robins draws better than your cat, your dog, even your budgie. check out her work at http://www.jennyrobins.co.uk